15th Annual Reflections on the Holocaust and Genocides

The purpose of this event is education, information, and activism. We hope to learn and acknowledge our failings and make a personal commitment to our share of saying, "Never Again."

Tickets are complimentary, but donations are accepted

We hope you will walk out of the event with a genuine feeling of being a contributor towards building a cohesive world where no human has to live in apprehension or fear of the other. 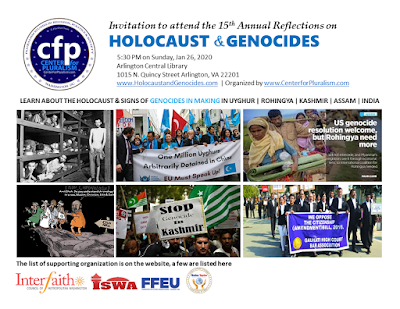 The Jewish community has been commemorating the Holocaust event since 1953, known as Yom HaShoah in Synagogues around the world. The general public learns it by visiting the Holocaust Museums and educational institutions.

At the Center for Pluralism, we are committed to spreading knowledge of the Holocaust and Genocide through interfaith and public events, including the Annual reflections.

Our format consists of four parts; Interfaith prayers, Holocaust, Genocides, Massacred and the Pledge of Peace. Silently, we will acknowledge all suffering, but physically we are limited to a few Genocides each year.

This year, a Holocaust survivor will share his story, followed by updated Uyghur, Rohingya, and the signs of making of Genocide in India. I urge everyone to watch the Schindler's list and Civil War movies to grasp the signs.

I believe, when we acknowledge each other's grief and participate in each other's commemoration, we connect with the humanness within ourselves and seed the relationship of understanding and caring for each other.

There is a shameless cruelty in us, either we shy away or refuse to acknowledge the sufferings of others, worrying that it will devalue our own, or amounts to infidelity to our pain, and every community and nation has suffered through this. To all those who have endured the Holocaust, Genocides, Massacres, Ethnic Cleansing, Land Mines, Hunger, Rape, Torture, Occupation, Expulsion, and inhuman brutality, we must say, you are not alone. The least we can do in the process of healing is to acknowledge every one's pain in one voice.

This is a Muslim initiative to assure fellow humans who have endured the Holocaust, Genocide, ethnic cleansing, massacres, rapes, injustice and other atrocities that we are all in this together to create a better world. Tikkun Olam is our sacred duty.

Published at 148 News Outlets
A few are listed below 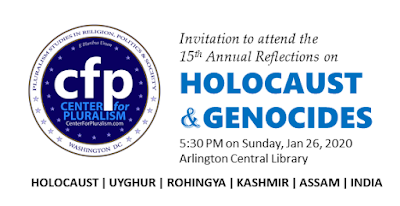 Posted by Mike Ghouse at 9:30 AM No comments:

American Muslim Agenda - What is it?

What is that Americans Muslims want? How close are they to what you want? What can they do about it? What are your issues with each other? If you are a conservative, grudgingly, you'll see the value in this book, and if you are a moderate, you'll dance and sing along with joy.

You and I have a responsibility to create a world where, you, me, and our grandchildren can live without apprehensions. No matter we go, we should feel secure about faith, race, ethnicity, culture and our political and sexual orientation.

Would the book American Muslim Agenda bring attitudinal change among Muslims?  Yes, it will, it’s akin to planting seeds and nurturing it to give the beneficence to the next generation. I know most American Muslims will wholeheartedly subscribe to the refreshed understanding of Islam, we need to expand it to more Americans.

Some of the reservations we have about Muslims and Islam are based on what we have heard from our parents, teachers, clergy, favorite media people and others.  We need to find the truth on our own and find freedom from misunderstandings. It is a blessing to be free.
Muslims have shied away from confronting difficult issues about their faith, and most of them don't even have a clue about the essence of Islam, it was never articulated before in the history of Islam.

A few medieval scholars have reduced Islam to rituals, five pillars, dhimmi, jizya, sharia, externalities, and enforcement of your rules on to others. That is not Islam, and most Muslims can recite verses that Islam is about free will. God uploaded free will into Adam’s DNA, and emphasized it in the Quran, the prophet practiced ‘freewill’ and established examples for it. Sadly, Muslims know the truth but were bullied into silence with fatwa bombs. All I have done is articulated what Muslims believe, but dared not say it. The book is the voice of the majority of ‘American’ Muslims.

This book is a product of twenty years of research and thousands of discussions in which Muslims, non-Muslims, and “Islamophobes” have participated in it, including debates on Fox News with Sean Hannity, Stuart Varney, Pamela Geller, Brigitte Gabrielle, Robert Spencer, Jamie Glazov, Raymond Ibrahim, Walid Shoebat, Wafa Sultan, and several others.

Islam is about living your life and letting others live theirs. Islam is about building cohesive societies where all of God's creation lives with dignity and freedom. In God’s universe, we are merely a speck, and no one is more privileged than the other. If you are a moderate individual of any faith, you will find the book in tune with you.

It is time to go beyond the five pillars of Islam, and I hope the Imams and Muslim scholars who are free thinkers would appreciate the contents of the book. This book may indeed become a reference manual for teaching Islamic values that contribute to creating a better world for all humanity.

The American Muslim Agenda offers guidance to Muslims to be one with all, and it voices what Muslims believe and live with and empowers them to live their lives and let others live with free will.  The book opens the door to people of other faiths to shed their biases and join hands in creating a world of safety, security, and harmony for all humanity.

Islam is a public religion, and Muslims don't own it exclusively. You are invited to participate in discussions, including your faith.  The book is expected to initiate conversations about the nature of Islam and fellow humans. I welcome your criticism (after reading the book).

You can get the book by calling 1-888-795-4274 x 4528 or get it from Amazon online or a book store. You can find the talking points at www.AmericanMuslimAgenda.com.

Dr. Mike Ghouse is committed to building a cohesive America and offers pluralistic solutions on issues of the day. His new book, the “American Muslim Agenda” is about everything you wanted to know about Muslims. The book is available at Xlibris and Amazon. Mike is a public speaker, author, interfaith wedding officiant, and the executive director of the Center for Pluralism in Washington, DC. More about him at https://www.linkedin.com/in/mikeghouse/

Posted by Mike Ghouse at 6:14 PM No comments:


The acronyms SOB, AH, BS and others are certainly uncouth, but they effectively communicate a purposeful message, hence I made that choice.  The Warning poster to Terrorist is a double edged sword and is at the bottom - the big red poster.

The following comments have been received against the poster below.

In a learning environment, good thoughts and concrete ideas are developed with criticism and feedback; here is why this kind of response is needed.

This is the right time to forge peace to the society in general, and American society in particular by boldly and loudly getting people to get the message, and i.e.,


I am being assertive, never has any Muslim or other communicated this so clearly and it is time we do that, thank God for the opportunities he has blessed us with to find solutions.   If I don't, no one will speak, and I sincerely hope many of us to speak up, do it on your own or join me.


It is time we separate the evil from good.

Bottom line is to free Islam and Muslims from the stupid stereotyping, and focus on punishing the bad guys and restoring trust in the society.


You SOB, you are the damned murderer, you messed up the peace, and your ass will nailed big time.

Don’t give me the BS about your job, childhood, parents, kids, siblings, spouse, imam, rabbi, pastor or the pundit. You did it and you'll pay for it.
I am not stupid to buy in your argument that your religion made you do that, and then bark at the religion endlessly. AH, you are the bad guy and you are going to pay for it. I am here to restore justice in the society and not be detracted and scream at your religion like a stupid ass. I can hang you, shoot you, bury you and beat you up to restore justice and trust in the society, and that is my goal

Note: Mr. Terrorist, I don't condemn you, it is your sin I condemn. If you claim to be a Muslim, just remember, those guys who recruited you, and cheated you with  false promises of Hoories and virgins in paradise were dead wrong. There is no such thing nor is it mentioned in Qur'an, instead you will rot in jail for life. Would you turn in your recruiters for cheating you? Would you read the correct translations of Qur'an, we might minimize your sentence?

This should be the attitude of Law enforcement
Authorized by Mike Ghouse, World Muslim Congress.